A Journey from Inner to Outer Space 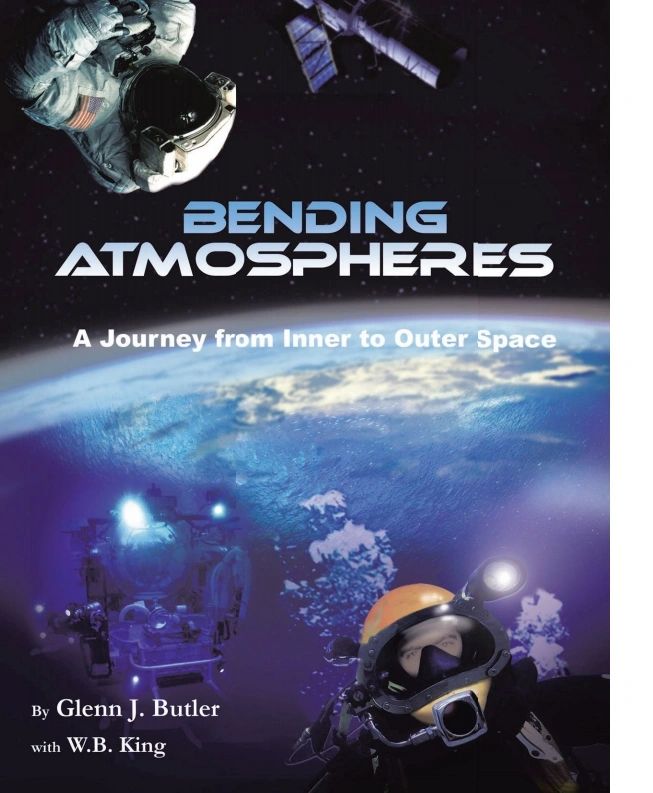 A memoir of a young man’s dream of space flight and deep diving, Bending Atmospheres is a dazzling adventure recounting daring, heroic professionals learning to work at undersea pressures to 1,000 feet sea water and in the vacuum of orbital space traveling at 18,000 miles an hour. Readers are taken through the early development of deep diving tri-mix, nitrox and neon diving gas mixtures and decompression tables, to early diving in the treacherous North Sea, National Geographic expeditions seeking famed sunken treasure, and methods used to train astronauts for space walks to repair the Hubble Space Telescope.

“Bold, daring, exciting adventures – fraught with danger befitting James Bond – are at the heart of this valuable contribution to the literature of how humans developed techniques, protocols, and different breathing gas mixtures for survival, working, and exploration in both the deep sea and space environment by one of the men directly involved in those developments.” - Bernie Chowdhury – Author – The Last Dive

With over 50 years of experience in military, scientific, commercial diving, aerospace and hyper-hypobaric engineering, research and clinical operations, Glenn J. Butler is the founder and CEO of Life Support Technologies (LST) group.

Over the course of his career, Glenn and key associates have developed and provided advanced commercial and military deep diving and saturation techniques decompression tables and equipment. Currently, he has 12 deep diving/hyperbaric technologies patents and 48 peer-reviewed scientific papers.

Along with his longstanding connections and relationships with NASA, the Department of Defense, the National Oceanic and Atmospheric Administration, the Undersea and Hyperbaric Medical Society and the National Pressure Injury Advisory Panel, Glenn is a fellow at the Manhattan-based Explores Club. This designation is reserved for those who have distinguished themselves by directly contributing to scientific knowledge in the field of geographical exploration or allied sciences.

An award-winning journalist (New York Press Association and Jesse H. Neal Award), W.B. King has written over one thousand articles on subjects ranging from entertainment to real estate to technology, among other wide-ranging topics. He regularly contributes to regional and national publications and is co-founder of the financial technology publication, Finopotamus.

For more than five years he taught writing courses at New York University School of Continuing and Professional Studies. A graduate of the State University of New York at New Paltz, King has written, ghostwritten and co-authored numerous books.

There is a small but enthusiastic international community of physicians, scientists, engineers, and practitioners at universities, government and civilian laboratories, and the military who have devoted the better part of their careers to understanding and working with exotic atmospheres beyond those in the terrestrial environment at sea level. I count myself among the few lucky enough to be in this community. Glenn Butler, the principal author of this book, is another who, with a few others, has documented his personal, scientific, and operational experiences in a rare window into the fertile and exciting period of the past century during which so much new knowledge has been developed, practically implemented, and safely tolerated for use from the lowest pressures in space to the highest pressures underwater including medical and civil engineering applications. My perspective has largely paralleled that of Glenn’s in time but with greater emphasis on operational military diving and university research. And as I had the good fortune to work with Glenn’s colleagues a few years before he entered the field, I have been fascinated with how the earlier developments with which I was familiar have led to greater understanding and worldwide progress during Glenn’s career.

Those of us in the field have benefited from a number of supporting national and international organizations that have published specialty journals and maintained libraries at which historical literature is archived. These include the Undersea and Hyperbaric Medical Society, the European Underwater and Baromedical Society, the National Oceanic and Atmospheric

Administration, the Rubicon Foundation, U.S. Navy and NASA, among others. Better still, these groups are coalescing to make their holdings more readily available to interested people. Glenn’s book, Bending Atmospheres: A Journey from Inner to Outer Space, is a welcome addition to this niche publishing genre. Glenn’s important work in this industry, along with his intriguing life story, should serve as inspiration. March, 2020

Copyright © 2021 Bending Atmospheres - A Journey from Inner to Outer Space - All Rights Reserved.